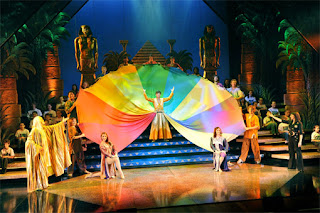 Thanks to East Midlands Trains I made the journey to Nottingham on Friday 26th October 2012 which included a visit to Theatre Royal Nottingham to attend a performance of Joseph and the Amazing Technicolor Dreamcoat starring Keith Jack as Joseph and Laura Ingram as the Narrator. This was a wonderful opportunity to see this Andrew Lloyd Webber Musical.

The Biblical saga of Joseph and his coat of many colours comes to vibrant life in this delightful musical parable. Joseph, his father's favourite son, is a boy blessed with prophetic dreams. When he is sold into slavery by his jealous brothers and taken to Egypt, Joseph endures a series of adventures in which his spirit and humanity are continually challenged. He is purchased by Potiphar where thwarting advances from Potiphar's wife lands him in jail. When news of Joseph's gift to interpret dreams reaches the Pharaoh (wryly and riotously depicted as Elvis), Joseph is well on his way to becoming second in command. Eventually his brothers, having suffered greatly, unknowingly find themselves groveling at the feet of the brother they betrayed but no longer recognise. After testing their integrity, Joseph reveals himself leading to a heartfelt reconciliation of the sons of Israel. Set to an engaging cornucopia of musical styles, from country-western and calypso to bubble-gum pop and rock 'n' roll, this Old Testament tale emerges both timely and timeless.

Any dream will do and I'm dreamed of seeing Joseph and the Amazing Technicolor Dreamcoat. My dream came true at Theatre Royal Nottingham where the cast put on a brilliant show full of many splendid songs including Jacob and Sons, One More Angel in Heaven and Go Go Go Joseph. This was a show of many colours and was full of fun. The audience was full of smiling faces as the magical of this musical spread throughout the whole theatre.

Then Joseph said to his brother, “Come close to me.” When they had done so, he said, “I am your brother Joseph, the one you sold into Egypt! And now, do not be distressed and do not be angry with yourselves for selling me here, because it was to save lives that God sent me ahead of you. Tell my father about all the honour accorded me in Egypt and about everything you have seen. And bring my father down here quickly.” Joseph had his chariot made ready and went to Goshen to meet his father Israel. As soon as Joseph appeared before him, he threw his arms around his father and wept for a long time.
Posted by Andy Yourglivch at 10:10