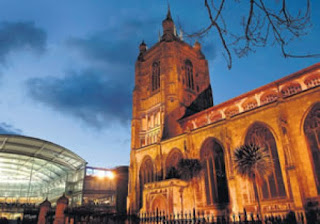 On Saturday 20th October 2012 I attended the Jonathan Wiseman Classical Guitar Recital at St. Peter Mancroft Church, Norwich as part of the Mancroft Music Autumn Recital Series. Jonathan Wiseman studied at the Royal Academy of Music, London and in 2011 won the Julian Bream Prize that is awarded for artistic excellence.

This was a wonderful performance from a very talented young musical which was very well appreciated by the lunchtime audience at St. Peter Mancroft Church. This was a brilliant recital full of imagination. Jonathan Wiseman has a bright future with a commission for a new guitar concerto as well as recording and publishing initiatives.
Posted by Andy Yourglivch at 13:41