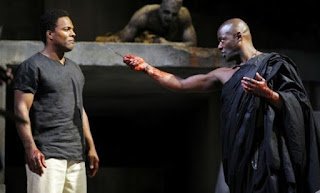 On Thursday 18th October 2012 I attended the Royal Shakespeare Company's performance of Julius Caesar at Norwich Theatre Royal. This was part of a national tour following runs in Stratford-upon-Avon and London's West End.

In this production William Shakespeare's great political thriller finds dark contemporary echoes in modern Africa. This epic struggle for power was directed by RSC Chief Associate Director Gregory Doran and was originally created as part of the World Shakespeare Festival for the London 2012 Festival. How many times shall this our lofty scene be acted o'er in states unborn and accents yet unknown.

Julius Caesar tells the story of the conspiracy against Caesar, his assassination and the defeat of his conspirators. Julius Caesar has returned to Rome triumphant from the war against Pompey. The Roman republic is prepared to heap him with new honours, causing concern and dismay among some senators who fear that too much power is held by one man.

Caius Cassius plots a conspiracy to murder Caesar, enlisting the support of the well-respected Marcus Brutus. Brutus has misgivings but is persuaded that Caesar's death is necessary for the good of the republic. However, he rejects Cassius' proposal that Mark Antony, close friend of Caesar, should also be killed. Brutus, Cassius and their co-conspirators stab Caesar to death at the senate house on the Ides of March.

There were wonderful performances from Paterson Joseph as Brutus, Cyril Nri as Cassius, Ray Fearon as Mark Antony and Jeffery Kissoon as Caesar as this classic story was transferred to present day Africa making it relevant for the 21st Century. The African music and stage set worked very well and the play being acted with African accents gave a real contemporary feel showing how present day political situations can compare to events in history. I really enjoyed my evening in the company of the RSC which made for a real thought provoking and progressive event at Norwich Theatre Royal.
Posted by Andy Yourglivch at 12:31