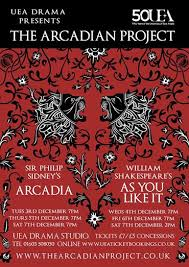 On the evening of Tuesday 3rd December 2013 I attended the performance of Sir Philip Sidney's Arcadia at the Norwich UEA Drama Studio. The Arcadian Project was put together by the UEA's students and academics to uncover a major missing tapestry in theatre history.

Combining a unique adaptation of Sir Philip Sidney's Arcadia with a production of Shakespeare's beloved comedy As You Like It, the project aimed to shed a brand new light on the works of Britain's most renowned playwright. I will be attending the performance of As You Like It on Friday 6th December 2013.

Arriving upon the utopian shores of Arcadia two young princes, Pyrocles and Musidorus, disguise themselves as an Amazon and a Shepherd to gain access to the Arcadian Princesses, who have been imprisoned by their father to avoid the dangers foretold by a mysterious Oracle. Together they venture into a world of beauty and deception, where every shepherd is a politician, where the court lies in the country and where comedy cascades into tragedy. Under a tree will I take my rest for, howsoever a man be exalted, the beginning and end of the body is earth.

This performance by the UEA's Third Year Drama Students directed by Anthony Gash took us on a journey through fields and forests in search of the lost golden world. I really enjoyed my evening at the UEA Drama Studio and was able to see how this play influenced Shakespeare's As You Like It. The sword fighting was great as well!
Posted by Andy Yourglivch at 09:33