The Seagull at the Maddermarket Theatre 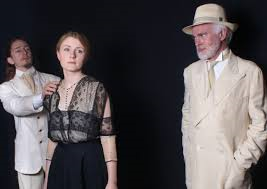 On the afternoon of Saturday 30th November 2013 I attended The Norwich Players performance of The Seagull by Anton Chekhov at the Maddermarket Theatre, Norwich. Christopher Hampton's brilliant and highly actable translation of Chekhov's masterpiece along with the Maddermarket's daringly theatrical interpretation breathed new life into this enchanting, romantic and heartbreakingly beautiful classic about love, loss and art.

Chekhov described his play as a comedy with landscapes (a view over a lake), a great deal of conversation about literature, little action and a ton of love. A rather modest description for a ground-breaking stroke of genius which ultimately laid the foundations for modern drama, and whose profound influence is still felt in theatre and cinema today.

The Seagull is a slice-of-life drama set in the Russian countryside at the end of the 19th century. The cast of characters is dissatisfied with their lives. Some desire love. Some desire success. Some desire artistic genius. No one, however, ever seems to attain happiness. This production by Stephen Picton was brilliantly performed by The Norwich Players which proved to be one of the highlights of this year's productions at the Maddermarket Theatre.
Posted by Andy Yourglivch at 10:57