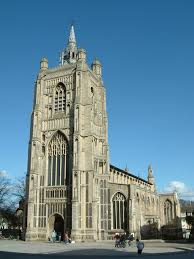 On the afternoon of Saturday 7th December 2013 I attended the Mancroft Music Preparing for Christmas Autumn Recital at St. Peter Mancroft Church, Norwich which featured The Girls' Choir and Choral Scholars of St. Peter Mancroft, Julian Haggett and Harry Sullivan - Organ, Camilla Pay - Harp and Jody Butler - Director. The programme was entitled Preparing for Christmas as we were now in the season of Advent, when we prepare for the coming of the Lord at Christmas and ultimately the end of time.

This was a wonderful Autumn Recital at St. Peter Mancroft with the highlight being Benjamin Britten's A Ceremony of Carols which as a tradition at the church, is performed each year to mark the start of Advent. There was a large audience in attendance at the last Mancroft Music Recital in the Autumn 2013 series.
Posted by Andy Yourglivch at 12:57