The Nutcracker at the London Coliseum 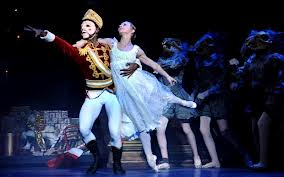 On Friday 20th December 2013 I attended the English National Ballet's matinee performance of Tchaikovsky's The Nutcracker at the London Coliseum. We took a journey back in time to a frost-covered, gas-lit London and joined Clara, her Nutcracker doll and the magician Drosselmeyer in this traditional, festive tale.

This production of The Nutcracker was based on a concept by Toer van Schayk and Wayne Eagling. There were fantastic performances from Elena Glurdjidze as Clara and Fabian Reimair as the Nutcracker. Gavin Sutherland conducted The Orchestra of English National Ballet.

On an enchanted Christmas Eve, under the heavy boughs of the candlelit tree Clara battled with the Mouse King and fell in love with a handsome stranger. As the air grew colder and snowflakes began to fall, Clara and her valiant Nutcracker took a hot air balloon ride across the frost-dusted London skyline to the glistening Land of Snow where her adventure really began.

In a world of Edwardian elegance, The Nutcracker brought to life the eternally popular Tchaikovsky score featuring the Dance of the Sugar Plum Fairy and the Waltz of the Flowers. This classical production is a magical, memorable and unmissable Christmas treat. This was the third year in a row that I have seen this production at the London Coliseum and it is always a wonderful experience and performance.
Posted by Andy Yourglivch at 10:15