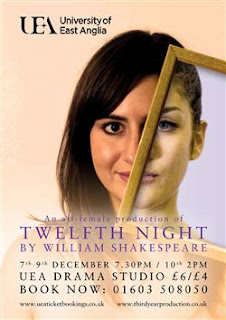 I made my way to the UEA Drama Studio on Wednesday 7th December 2011 for an all-female production of William Shakespeare's Twelfth Night by the University's final year Drama students. It was a night that put a new perspective on this funny and moving comedy as it is normally performed by an all-male cast.

Shipwrecked and separated from her twin brother, Viola disguises herself as a boy in order to serve the Duke of Illyria. While wooing a countess on his behalf she finds herself the object of his beloved's affections.

Viola's brother Sebastian arrives and a trick is played upon the countess' steward Malvolio. Confusion reigns in this romantic comedy of mistaken identity.

A fun time was had by all with lots of laughter filling the UEA Drama Studio. There were splendid performances from all the cast who brought a lot of energy and enthusiasm to this play that is full of shifts and surprises.
Posted by Andy Yourglivch at 12:16