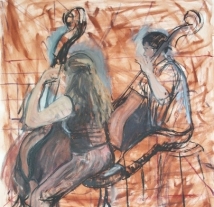 On Friday 9th December 2011 I made my way to St. Andrew's Hall, Norwich for the UEA Symphony Orchestra and Choir Christmas Concert. This was their first concert since it was announced that the UEA School of Music would close. During the evening Sharon Andrea Choa reassured us that these concerts would continue in the future with support from the UEA.

Vivaldi's Winter evokes the cold icy wind while sitting next to the fireside before venturing outside to walk on the ice. After some slips and falls the ice cracks and breaks up and back indoors we hear all the winds battling it out. Simon Smith brought us all the joys of Winter with his fine violin playing.

Oh the glory of Vivaldi's glory, yes Antonio Vivaldi again this time bringing us Gloria in excelsis. This was a glorious performance from the Orchestra and Choir that lifted the spirits of everyone in attendance at St. Andrew's Hall. Glory to God in the highest and on Earth peace to men of goodwill.

After the interval we were treated with Sir John Tavener's God is With Us which is a work commissioned in 1987 for the Choir of Winchester Cathedral. This was followed by John Rutter's What Sweeter Music which sets words adapted from a poem by Robert Herrick.

Next to be performed was Sir Christemas from Ave Rex composed by William Mathias. Ave Rex is a setting of four medieval carol texts composed in 1969. In this piece the choir shout a final Nowell. The concert finished with Ralph Vaughan Williams' Fantasia on Christmas Carols written in 1912. This was a wonderful way to finish this splendid and heart warming concert. I'm sure everyone in attendance were put into the Christmas spirit and left St. Andrew's Hall with smile on their faces.
Posted by Andy Yourglivch at 12:12