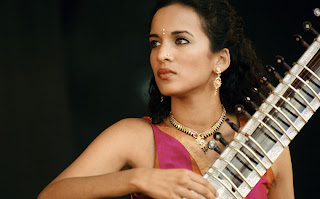 On Monday 5th December 2011 I attended Anoushka Shankar's concert at Queen Elizabeth Hall, London on her Traveller UK Tour. A night where Indian music and flamenco met with thrilling results. These two forms of music have a link through the Roma Gypsies who originated in Northern India.

On her latest album Traveller Anoushka Shankar has created a fusion of flamenco and Indian classical music with Spanish producer and guitarist Javier Limon. The centrepiece of the album is Boy Meets Girl which is a wonderful duet of flamenco guitar and sitar featuring Pepe Habichuela.

Anoushka Shankar was taught to play the sitar by her father Ravi Shankar and at Queen Elizabeth Hall she created a magical sound in front of a sellout crowd down by the South Bank. It was wonderful to see her play live alongside the Spanish musicians bringing the amazing Traveller album to a live audience. A brilliant evening which highlighted one of World Music's brightest stars.
Posted by Andy Yourglivch at 13:54