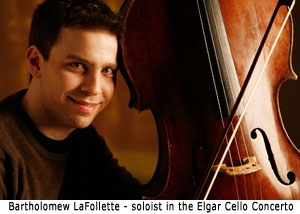 I was back at St. Andrew's Hall, Norwich on Saturday 10th December 2011 for the latest Norwich Philharmonic Orchestra concert which always means a large audience at this historic venue. This was a special night due to the links between Sir Edward Elgar and concert sponsors Hansells. The composer become good friends with Norwich solicitor Walter Hansell when he came to Norwich in 1905 to rehearse for the triennial Norwich Music Festival. The night's concert featured Elgar's Cello Concerto.

The opening piece of the evening Helios Overture was composed by Nielsen in 1903 while in Athens and inspired by the sight of the sun rising over the Aegean Sea. This was followed by Elgar's Cello Concerto in E minor which included an incredible performance from soloist Bartholomew LaFollette who along with his cello made St. Andrew's Hall his own which resulted in loud and warm applause from the enthusiastic audience.

After the interval we were given a splendid performance of Egdon Heath, Holst's portrait of a landscape which was inspired by Thomas Hardy's The Return of the Native. This was followed by my highlight of the night with music by one of my favourite composers. Sibelius composed his Symphony No.5 in E flat as part of the celebrations for his fiftieth birthday in 1915 though the definitive score was not released until 1919.

This was a mighty way to finish the concert and how better to conclude then with the six massive majestic strokes at the end of the Symphony. This was a night of triumph for the Norwich Philharmonic Society who for 171 years has it's main object to promote and perform orchestral and choral music. Tonight they performed orchestral music that they can be very proud of.
Posted by Andy Yourglivch at 11:18