The Sleeping Beauty at The Royal Opera House 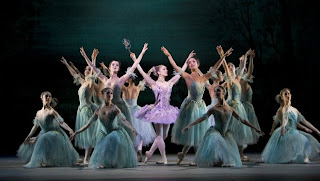 I made my way on an early morning train to London on Saturday 17th December 2011 eagerly looking forward to my visit to The Royal Opera House. It was a 12 noon start for the matinee performance of The Sleeping Beauty by The Royal Ballet so as soon as I arrived at Liverpool Street I made my way to Covent Garden.

The Sleeping Beauty was first performed at the Mariinsky Theatre, St. Petersburg in 1890.This was the ballet where Marius Petipa and Pyotr Ilyich Tchaikovsky expressed their genius to perfection. Today it is a cornerstone of The Royal Ballet's repertory. It was an afternoon to be taken to a world of fairytales full of splendour and colour with wonderful dancing.

King Florestan XXIV and his Queen have invited all the fairies to be godmothers at the christening of Princess Aurora. In her anger at not being invited Carabosse the Wicked Fairy gives Aurora a spindle saying that one day the Princess will prick her finger and die. The Lilac Fairy promises that Aurora will not die but fall into a deep sleep and will be woken by a prince's kiss.

At Princess Aurora's 16th birthday four princes vie for her hand in marriage. As Aurora dances she is given a spindle by an old woman which she pricks her finger with and falls into a dead faint. The old women reveals herself as Carabosse. The Lilac Fairy appears to fulfil her promise and casts a spell of sleep over everyone causing a thick forest to grow over the palace.

This was a magical afternoon to be at the Royal Opera House. It was an amazing experience to see The Royal Ballet perform live especially as The Sleeping Beauty is such a wonderful story and spectacle to watch. Tchaikovsky's music was performed brilliantly by the Orchestra of The Royal Opera House. A special mention needs to go out to Marianela Nunez who danced the role of Princess Aurora splendidly and completely delighted the audience. The Royal Ballet brought amazing movement and colour to this enchanting fairytale.
Posted by Andy Yourglivch at 16:42