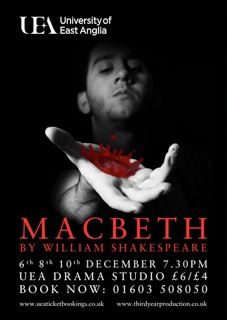 I was back at the UEA Drama Studio on Thursday 8th December 2011 for William Shakespeare's Macbeth another production from the University's final year Drama students. This is Shakespeare's tragedy of power, corruption and bloodshed.

The play is set in the bleak landscape of medieval Scotland. Macbeth and Lady Macbeth with the prophecy of the three witches are tempted into a ruthless hunt for glory. Dark and full of horror, Macbeth is not for the faint hearted.

The setting created on the night was spot on as we were taken back to the 11th Century. This was another triumph from the UEA Third Year Production Team. I enjoyed both my visits to the UEA Drama Studio where I experienced a warm and friendly atmosphere.
Posted by Andy Yourglivch at 12:56