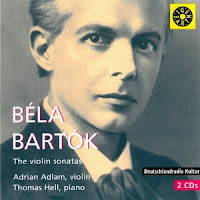 On Sunday 4th March 2012 it was the lateat concert in the Eaton Concert Series at St. Andrew's Church, Eaton, Norwich this time featuring Adrian Adlam in a solo violin recital. I made my way through the rain to join a large audience who had gathered in great anticipation for this event.

The programme for the afternoon was Partita in D minor - Bach, Ballade Sonata No.3 - Ysaye, Solo Sonata - Bartok and Ferdinand the Bull - Ridout. This was a wonderful in which Adrian Adlam could show all his technical abilities on the violin.

Adrian Adlam put on an amazing show for everyone in attendance which was greatly appreciated by us all. before the interval he played the pieces by Bach and Ysaye without the music while after the interval the music for Bartok's Solo Sonata was beamed onto a big screen therefore it was only fair that if we had the music he should have it as well.

For an encore Adrain Adlam played Alan Ridout's Ferdinand the Bull doing the speaking part in a Spanish accent which raised plenty of laughter in the audience. This was a fun way to bring this brilliant solo violin recital to an end. Afterwards he gave a masterclass to the children in attendance.
Posted by Andy Yourglivch at 10:16