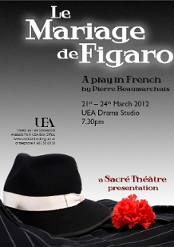 I went to the UEA Drama Studio on the evening of Friday 23rd March 2012 to attend the Sacre Theatre production of Le Mariage de Figaro. A play in French by Pierre Beaumarchais on which Mozart based his Opera. The play was written 5 years before the French Revolution. This production was set somewhere between the two World Wars of the 20th Century.

French Theatre at the UEA began in the 1970's and is aimed at developing and underpinning language acquisition skills while exposing key elements of French Theatre to UEA students, Norfolk Schools and the local French speaking audience.

The play begins shortly before the marriage of Figaro and Suzanne in a room in the Count's palace. Suzanne tells Figaro that the Count has made several advances on her. Meanwhile Marceline discusses a lawsuit with Dr. Bartholo. Figaro owes lots of money and cannot afford to pay the sum. He will be forced to marry her which would lead to the Count being free to seduce Suzanne.

Suzanne tells the Countess about the Count's attentions. Figaro plans to spread a rumour that the Countess is having an affair so that the Count will become suspicious and distracted enough to let him marry Suzanne. She agrees to pretend to give in to the Count's advances by accepting to meet him in the garden after dark however the Count hears that this is just a trap.

Figaro's trail with Marceline begins where Figaro discovers that he is in fact Bartholo and Marceline's illegitimate son. Figaro is delighted to meet his parents but Antonio will not let Suzanne marry an illegitimate child. Bazile reveals his former intention to marry Marceline but changes his mind after discovering that Figaro is her son. Figaro tells Suzanne that as their wedding and dowry are now secure she must not meet the Count as planned. The Countess urges her to go ahead, proposing that they swap clothes, so that she can expose her husband's infidelity.Figaro decides to seek revenge against Marceline's advice.

Figaro gathers a group of witnesses to assist him later on, then launches into a lengthy monologue against women, the aristocratic class and his own unhappiness. The Count enters and attempts to seduce his own wife, disguised as Suzanne. Figaro then approaches Suzanne, disguised as the Countess. After the various characters come out of their hiding place, the Countess reveals herself and the Count begs for forgiveness which he is given.

The Oily Rag Band brought together Beaumarchais, Mozart and early jazz on an splendid evening of French Theatre at the UEA Drama Studio. We were all entertained and most of us were laughing out loud as the Sacre Theatre gave us a night to remember. We all said God damn doing the Lambeth Walk as Erwann Limon as Figaro and Yael Chausson as Suzanne took us to the era of films like La Regle du Jeu and The Hunting Party that provided a similar view of the end of seigneurial privilege.
Posted by Andy Yourglivch at 04:26