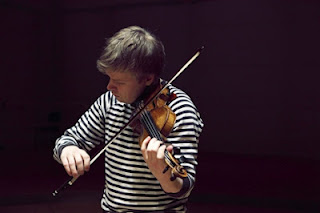 The programme began with two renderings of the same work from Francois Couperin. Thomas Ades makes Les baricades misterieuses sound familiar but somehow fresh and unknown. Three Studies from Couperin is an arrangement of three of Couperin's keyboard works for orchestra commissioned by the Basel Chamber Orchestra. Ravel's Le tombeau de Couperin was written in 1917 originally conceived as a monument to the music of the eighteenth century Baroque but after the composer served in the First World War it became a memorial to friends who had died in service.

Airs du rossignol and Marche chinoise are two pieces extracted from Igor Stravinsky's early opera The Nightingale which was composed between 1909 and 1914. Other arrangements that Stravinsky made around the same time are the Suites Nos 1 and 2 for Orchestra. Both suites include a number of dance movements.

Thomas Ades composed Concerto for Violin (Concentric Paths) in 2005 for British violinist Anthony Marwood. Concentric Paths has three movements but Thomas Ades conceives the work as really more of a triptych as the middle movement is the largest. It is a slow movement built from two large and very many small independent cycles that overlap.

This was a wonderful evening to be at Norwich Theatre Royal as Britten Sinfonia along with Thomas Ades and Pekka Kuusisto brought us a challanging and varied programme played to the highest quality. I loved the way Thomas Ades has taken works by Couperin and added to them. I had a very enjoyable evening and look forward to Britten Sinfonia's next visit to Norwich.
Posted by Andy Yourglivch at 09:08