Great Expectations at the Maddermarket Theatre 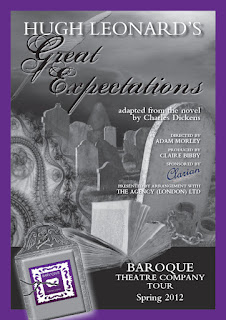 On Saturday 10th March 2012 I attended the Baroque Theatre Company's performance of Great Expectations at the Maddermarket Theatre, Norwich which was part of the nationwide celebrations of the 200th anniversary of the birth of Charles Dickens. This production was an adaption by Hugh Leonard from the novel by Charles Dickens.

The young Philip Pirrip known as Pip helps the escaped convict Abel Magwitch and sets in motion a train of events that will affect his life. He is taken under the wing of Miss Havisham and falls in love with Estella. He receives money from a mysterious source and renounces his humble past life but when it is revealed that Magwitch is his benefactor a painful process of moral education begins for Pip.

This was a wonderful evening at the Maddermarket Theatre with the Norwich based Baroque Theatre Company putting on a splendid show. The world of Charles Dickens full of the characters from Great Expectations were brought to life giving us all a night to remember. All our Great Expectations were fulfilled as we all celebrated the 200th anniversary of the birth of Charles Dickens.
Posted by Andy Yourglivch at 23:47