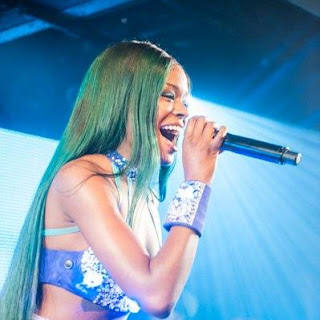 On the evening of Sunday 7th October 2012 I attended the Azealia Banks gig at Norwich Waterfront with support from Zebra Katz and Njena Reddd Foxxx. There was also a set from DJ Cosmo on a thrilling night of hip hop.

Brooklyn's Zebra Katz and Njena Reddd Foxxx got the Waterfront crowd in a party mood with hits like Ima Read and Hey Ladies. DJ Cosmo took it to another level with a set of hip hop classics before Azealia Banks took to the stage.

Azealia Banks complete with sea green hair performed tracks from her free online mix tape, Fantasea, and chart topping favourites such as Liquorice and 212. Then she took it to 1991 with a  uh, la la la, flirting with a cool french dude named Antoine, wanna taste the pastry chocolate croissant. 1991 my time has come. Azealia Banks showed us all what a star she is and that she has a very bright future. This was a fun night at Norwich Waterfront.
Posted by Andy Yourglivch at 13:27