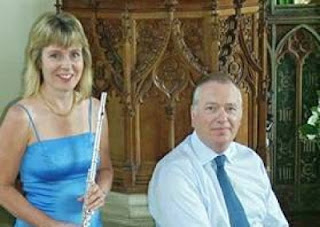 On Saturday 6th October 2012 I attended the latest Mancroft Music Autumn Recital at St. Peter Mancroft Church, Norwich featuring Anna Hopkins on flute and David Morgan on piano and organ in a programme called Flautissimo. Anna Hopkins moved to Norfolk in 2004. She works freelance as well as teaching and also performs on Baroque flute, alto flute and piccolo.

David Morgan lectured music at Norwich City College until 2006 as well as spending twenty five years as organist at St. Edmund's Church in Acle. Since his retirement David has maintained an active career as an accompanist and performs regularly with the Norwich Baroque Orchestra.

This was another wonderful lunchtime to be at St. Peter Mancroft Church in Norwich City Centre. My personal favourites from the recital were Jay Ungar's Ashokan Farewell and Hamilton Harty's In Ireland. Both Anna Hopkins and David Morgan played splendidly with a well though out and varied programme.
Posted by Andy Yourglivch at 11:22