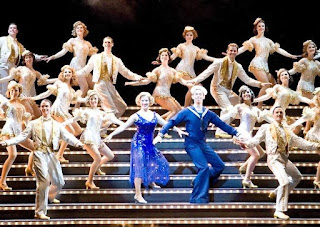 I made my way to 42nd Street on the evening of Thursday 11th October 2012 as the magic of Michael Stewart and Mark Bramble's tap dancing musical made it's way to Norwich Theatre Royal. With starring roles from Dave Willetts as Julian Marsh and Marti Webb as Dorothy Brock, this was a night of glamour no one wanted to miss. Jessica Punch played the role of Peggy Sawyer as we were taken to Broadway.

This musical is set in New York City and Philadelphia in 1933 telling the story of a humble, naive young actress named Peggy Sawyer who has come to audition for a new Broadway musical called Pretty Lady. Unfortunately, due to her nervousness, Peggy arrives to the audition late and misses her chance to join the chorus. Luckily, Peggy soon catches the eye of the famous director, Julian Marsh, and he gives Peggy her big break. However, the shows ageing leading lady, Dorothy Brock, quickly grows to dislike Peggy. On opening night, Ms. Brock falls and breaks her ankle. Panic spreads through the company, as the show is doomed for closure, until it is suggested that Peggy take the roll. In only thirty-six hours, Peggy learns twenty-five pages, six songs and ten dance numbers and becomes a star.

I loved the wonderful singing and dancing which made for a jolly good time with an uplifting feel good factor. 42nd Street is the ultimate backstage musical where dreams can come true. Peggy Sawyer grabbed the moment and became a big star. Brilliant songs like Keep Young and Beautiful, Lullaby of Broadway and I Only Have Eyes For You filled Norwich Theatre Royal. The tap dancing was a pleasure to watch and brought lots of fun to the production. My visit to 42nd Street was an awesome experience.
Posted by Andy Yourglivch at 11:27