Murder on the Nile at Norwich Theatre Royal 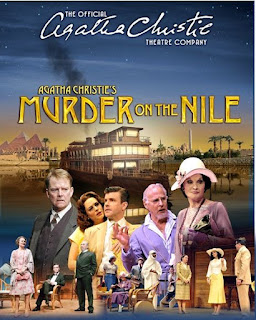 I was back at Norwich Theatre Royal on Monday 24th September 2012 for the opening night of Agatha Christie's Murder on the Nile performed by the official Agatha Christie Theatre Company. The action takes place on the deck of the paddle steamer Lotus on the Nile between Shellal and Wadi Halfa. This production starred Kate O'Mara, Robert Duncan, Susie Amy, Ben Nealon and Mark Wynter.

On board the steamer Lotus under the scorching Egyptian sun are honeymooners Simon Mostyn and his wealthy socialite wife Kay who are being pursued by Jacqueline De Severac an old flame of the newly wedded groom. When a body is discovered all fingers point to Simon's ex fiancee. Everything is not what it seems and Canon Pennefather is drawn into a web of intrigue and deceit as he finds himself on the trail of a ruthless murderer.

This was a superb production from the Agatha Christie Theatre Company with all the twists and turns of a classic Christie which kept us guessing until the end. A stylish evening at Norwich Theatre Royal with the stunning wardrobe on stage. Murder on the Nile proved to be a gripping voyage which entertained the audience throughout as we shared the experiences of the passangers down the Nile.
Posted by Andy Yourglivch at 04:49