Britten Sinfonia's Within Her Arms at Norwich Theatre Royal 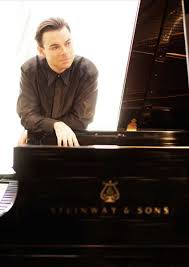 Stravinsky's Three Pieces for String Quartet was finished in 1914, revised in 1918, and eventually published in 1922. As most of the works by Igor Stravinsky, this three-movement work was arranged from a four-hands on one piano version, from which the final revised version of 1918 derives and differs in some respects. The manuscript contained no movement titles for any of the three pieces. However, with the passing of time, Stravinsky rearranged these three movements for large orchestra, together with his Étude pour pianola, and premiered the whole collection as Quatre etudes in 1928.

Within Her Arms was composed by Anna Clyne in 2008-09. The composer wrote: Within Her Arms is music for my mother, with all my love. London born Anna Clyne is a composer of acoustic and electro-acoustic music, combining resonant soundscapes with propelling textures that weave, morph and collide in dramatic explosions.

Mozart's Piano Concerto No. 12 in A major, K414 is the first of a set of three rather modest concertos for piano that Mozart began writing in 1782 and performed in his Lenten concerts of 1783. Mozart declared that he could be sure that all three would be a happy medium between what is too easy and too difficult.

Nicholas Maw Little Concert For oboe accompanied by strings and two horns is a kind of concert aria for oboe, was completed in 1988. It was written to celebrate the twenty first anniversary of the Orchestra of St. John’s, and as a tribute to the playing of Melinda Maxwell. The musical language employed represents an intermittent preoccupation of mine to write a piece somewhat light in specific gravity and tone, but that does not really fall into the category of light music.

Haydn composed his Symphony No. 60 in 1774 which is sometimes given the nickname Il Distratto or The Distracted. The symphony makes use of music Haydn wrote for a play, Le Distrait, by Jean-François Regnard, given a German revival in 1774 by Karl Wahr under the German title Der Zerstreute. Symphony No. 60 contains the overture, four entr'actes and finale from the music composed for the five-act play.

This was a fantastic night of Classical Music at Norwich Theatre Royal which was greatly enjoyed by the enthusiastic audience. Britten Sinfonia were on top form for their opening concert of the season. My highlight of the evening was Stravinsky's Three pieces for String Quartet.
Posted by Andy Yourglivch at 10:44