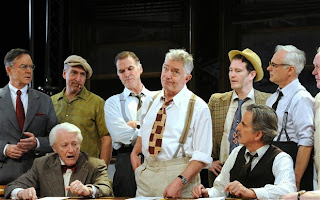 On the evening of Tuesday 22nd October 2013 I attended the performance of Twelve Angry Men at Norwich Theatre Royal. This brand new production paid tribute to the 1957 film version, starring and produced by Henry Fonda. This is often lauded as one of the great must see movies of all time.

Twelve jurors have death on their mind and a life in their hands as they have to decide the fate of a young delinquent accused of murdering his father. But what begins as an open and shut case becomes a dilemma for each of the Twelve, as their prejudices and preconceptions about the trial, the accused and each other, turn the tables every which way, until the nail biting climax.

Twelve Angry Men was written by Reginald Rose who was inspired by his own experience serving on a jury. This production was directed by Christopher Haydon with set and costume design by Michael Pavelka. Martin Shaw and Robert Vaughn gave fantastic performances on a night at Norwich Theatre Royal when a life hanged in the balance.
Posted by Andy Yourglivch at 07:44