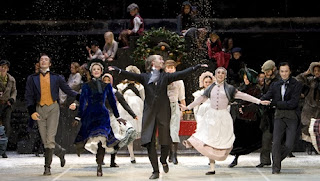 On the evening of Wednesday 9th October 2013 I attended the Northern Ballet's performance of A Christmas Carol at Norwich Theatre Royal. Christmas arrived early this year as Northern Ballet's heart-warming and hugely popular adaptation of Charles Dickens' classic tale returned to the stage.

Colourful sets and costumes by Olivier Award winning Lez Brotherston (Northern Ballet's Romeo and Juliet, Matthew Bourne's Sleeping Beauty, Swan Lake, Edward Scissorhands) conjured up a traditional Victorian Christmas, while Carl Davis' festive score blended classical music with traditional Christmas Carols, played live by Northern Ballet Sinfonia. A Christmas Carol has been an audience favourite for over 20 years and was a guarantee to get the festive season off to a magical start.

I will live in the Past, the Present and the Future!’ Scrooge repeated, as he scrambled out of bed. He was so fluttered and so glowing with his good intentions … the shadows of the things that would have been, may be dispelled. They will be. I know they will! This was such a magical evening to be in attendance at Norwich Theatre Royal as Northern Ballet put us in a festive mood. God Bless Us, Every One.
Posted by Andy Yourglivch at 09:23