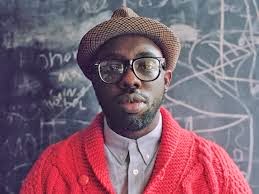 On the evening of Thursday 10th October 2013 I attended the Ghostpoet gig at Norwich Arts Centre with support from No Ceremony and Sullivan and Gold. This gig was part of Norwich Sound and Vision Festival. I love both of Ghostpoet's albums, Peanut Butter Blues and Melancholy Jam and Some Say I So I Say Light and was greatly looking forward to seeing him live.

Sullivan and Gold is the pen name of Adam Montgomery and Ben Robinson who both hail from Co. Derry, Northern Ireland. Their sound is an evocative mix of Laurel Canyon soul and British alt-indie. Bold, atmospheric and emotive songs. Sullivan and Gold release their new album on Smalltown America, For Foes in the UK and Ireland on 4th November 2013.

No Ceremony are an Electronic three piece from Manchester. The band announced their arrival onto the musical landscape, with their track Hurt Love. 2012 saw the release of further songs which were all included on their summer 2013 debut album No Ceremony.

Ghostpoet is a singer and producer from Coventry. In June 2010, Ghostpoet released his first EP The Sound Of Strangers on Brownswood Recordings. He released his debut album Peanut Butter Blues and Melancholy Jam in February 2011. Ghostpoet's second album Some Say I So I Say Light was released in May 2013. Ghostpoet reminds me of Tricky with his mixture of Hip Hop and Electronica.

Ghostpoet was brilliant on the night but due to the late running of the show he had to cut his set short at Midnight. He told us he wanted to come back to the Norwich Arts Centre next year. No Ceremony and Sullivan and Gold were great as support on a night when Ghostpoet gave us a night to remember with his fantastic music.
Posted by Andy Yourglivch at 09:54