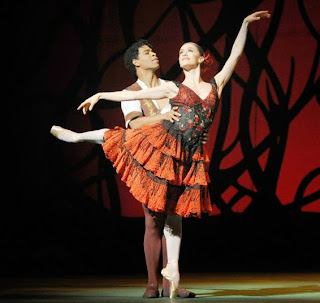 On Saturday 5th October 2013 I attended The Royal Ballet's matinee performance of Don Quixote at The Royal Opera House. I caught a early train from Norwich to London eagerly looking forward to this fantastic event.


Carlos Acosta presented his first work for The Royal Ballet, a dance adaptation of the classic novel by Miguel de Cervantes. Acosta has already established himself as an exciting choreographic talent with Tocororo – A Cuban Tale, a semi-autobiographical work that draws on his childhood in Cuba and broke box office records at Sadler’s Wells Theatre in 2003.

The adventures of the bumbling knight Don Quixote and his ever-faithful squire Sancho Panza have been the inspiration for countless ballets, of which one of the most well-loved is the version by 19th-century Russian choreographer Marius Petipa. Acosta has danced the virtuoso role of Basilio many times, and now brings his unique and vibrant vision to the story, drawing on Petipa and with music by Ludwig Minkus, full of Spanish flair and atmosphere. Don Quixote, with its famously bravura Act III pas de deux and its infectious joie de vivre makes for a wonderfully entertaining experience.

There were fantastic performances from William Tuckett as Don Quixote, Roberta Marquez as Kitri, Alexander Campbell as Basilio and Laura Morera as Mercedes as The Royal Ballet brought this colourful Spanish novel to the stage. Don Quixote was a ballet full of emotions and amazing dancing. The costumes were sensational as this new production of this exuberant tale of friendship, love and loyalty gave us an afternoon to remember.
Posted by Andy Yourglivch at 00:50