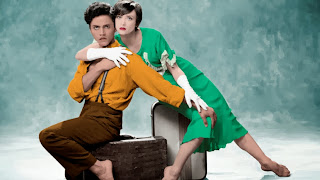 On the evening of Thursday 17th October 2013 I saw Rambert at Norwich Theatre Royal. They are the most distinctive and creative contemporary dance company working in Great Britain today.

Rambert, a powerhouse of dance since 1926, presented a spectacular evening of entertainment featuring terrific dancers, wonderful costumes and great live music from the Rambert Orchestra conducted by Paul Hoskins. The programme consisted of SUB, Dutiful Ducks, Sounddance and The Castaways.

Following the critically acclaimed and multi-award nominated A Linha Curva, Israeli choreographer Itzik Galili returned with his high energy work, SUB, a battlefield of relentlessly sparring testosterone. SUB is performed by seven men responding with full force to the rhythmic complexity of Michael Gordon's Weather One.

Using Charles Amirkhanian's tongue-twisting sound-text of the same name as a starting point, Richard Alston's short solo for a male dancer, first created for Michael Clark in 1982, is sharp and witty. Dutiful Ducks premièred as a solo in 1982. It premièred for four dancers by Ballet Rambert at Marlowe Theatre, Canterbury on 10 October 1986.

Made in 1975 by the late master of contemporary dance, Merce Cunningham, this ecstatic opus was inspired by the words of writer James Joyce and the tiny racing life seen under a microscope. Sounddance made its UK revival première at Sadler's Wells, London on Tuesday 16 October 2012. Sounddance was last performed in London July 1980.

American-born Barak Marshall, has presented work across the world but rarely in the UK. Arresting, original and fevered in style, Barak made his Rambert debut this October with The Castaways. Set to a vibrant mix of traditional Yiddish music and American popular tunes from the 1950s, Barak Marshall's The Castaways is a humorous and playful exploration of human nature. Celebrated for his inventive choreography and witty theatricality, Barak has a truly unique style, the way he brings together popular music, inventive dance and enthralling story lines which makes for an unmissable spectacle.

This was a fantastic night of Contemporary Dance at Norwich Theatre Royal with Rambert performing four wonderful works. The Castaways was my favourite piece which followed the journey of twelve souls trapped in a kind of no-man's land.
Posted by Andy Yourglivch at 23:01