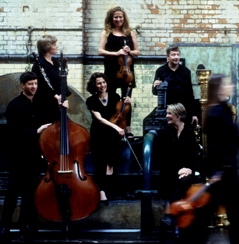 It was Britten Sinfonia at lunch on Friday at The Assembly House, Norwich as we were once again treated to a wonderful varied concert at this historic building in the Fine City. The line up on 18th November 2011 was Thomas Gould - violin, Miranda Dale - violin, Caroline Dearley - cello, Stephen Williams - double bass, Joy Farrall - clarinet, Andrea de Flammineis - bassoon and Stephen Stirling - horn.

The programme consisted of Till Eulenspiegel einmal anders - R. Strauss arr. Hasenohrl, Borderland - Charlie Piper and Septet in E flat, Op. posth - Bruch. The opening piece was made by Franz Hasenohrl in 1954 when he turned R. Strauss' fifteen minute tone poem for an orchestra into an eight minute piece for a quintet.

Borderland composed by Charlie Piper was on it's World premiere tour and was co-commissioned by Britten Sinfonia and Wigmore Hall. The piece is based on the transitional state between wakefulness and sleep. The programme was completed by Bruch's Septet in E flat, Op. posth that was composed in 1849 when the composer was eleven years old. It was only discovered in 1981.

This was another high quality performance from Britten Sinfonia when even the Sun tried to get in on the action as Thomas Gould had to ask for the blinds to be drawn during the closing piece. Maybe it will be sunglasses at lunch next time.
Posted by Andy Yourglivch at 12:30