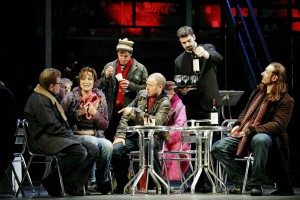 On Friday 18th November 2011 I attended the Glyndebourne Opera's performance of Giacomo Puccini's La Boheme at Norwich Theatre Royal. This was a wonderful opportunity for everyone in Norwich to witness world class Opera locally, this being one night of a five night residency which included performances of Don Pasquale and Rinaldo.

The writer Rodolfo and painter Marcello complain about their cold flat and burn Rodolfo's latest script. The philosopher Colline and the musician Schaunard return with supplies and money and after Benoit their landlord comes for his rent but gets plied with drink and is thrown out the friends go out to Cafe Momus leaving Rodolfo to stay and finish an article.

Rodolfo is interrupted by a neighbour, Mimi, whose candle has gone out. Mimi faints and when she revives he relights her candle but she has lost her key and her candle goes out for a second time. Rodolfo puts his candle out and tells Mimi about his life and dreams while Mimi tells of her life of sewing. They declare their love and leave for Cafe Momus. On the way Rodolfo buys Mimi a hat before joining his friends for dinner.

A few months later Mimi searches for Marcello who has moved in with Musetta. Overcome with coughing she arrives to tell Marcello that Rodolfo walked out and is consumed by jealousy. When Rodolfo appears she hides and overhears he wants to leave her because he can't cope with her illness. He thinks her condition is due to his poverty. Rodolfo hears Mimi cry and rushes to her and they agree to part until spring.

The friends making the best of a bad situation make their own entertainment when Musetta bursts in with Mimi who is dying. Mimi has left her rich lover as she wanted to be brought back to die. Musetta, Marcello and Colline go to sell their things to buy medicine while Mimi and Rodolfo reaffirm their love and reminisce. The friends return and Musetta gives Mimi something to keep her warm and prays. Mimi dies peacefully leaving Roldolfo grief-stricken.

Complete with a rotating centre stage the story is now set in modern day Paris. With amazing performances from all the cast and brilliance from the Glyndebourne Orchestra this was a very special night at Norwich Theatre Royal. The sad ending emotionally moved us but throughhout the performance there were many times when the theatre was full of laughter.
Posted by Andy Yourglivch at 13:10