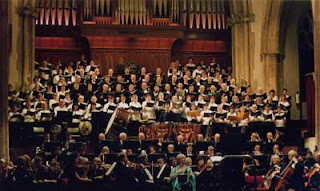 On Saturday 5th November 2011 it was Norwich Philharmonic Society's first concert of the 2011/12 season at St. Andrew's Hall, Norwich. I made my way to this historic venue with great expectations and was not disappointed as the Orchestra and Chorus put on a wonderful performance.

The programme for the evening was The Noonday Witch - Dvorak, Suite from Der Rosenkavalier - Richard Strauss  and Mass in B flat Harmoniemesse - Haydn. Conductors for the evening were Matthew Andrews and David Dunnett with Cecilia Osmond - soprano, Clare McCaldin - mezzo-soprano, Simon Wall - tenor and Brian Bannatyne-Scott - bass.

The Noonday Witch is one of the five symphonic poems composed by Dvorak from 1896-97 that tells the story of a mother who threatens her child with the witch. Richard Strauss wrote Der Rosenkavaler in 1909-10 from which he later extracted two waltz sequences. Mass in B flat, Harmoniemesse was the last of six masses that Haydn wrote for Prince Nicolaus II's wife Marie Hermenegild.

In the first half of the programme we had the dramatic piece from Dvorak followed by Richard Strauss' splendid works from Der Rosenkavaler but the highlight of the evening had to be Haydn's Harmoniemesse complete with chorus in full voice. Harmonie is German for wind-band as the mass is in B flat making it suitable for a large wind section. Glory be to God on high and on earth peace to men of goodwill.
Posted by Andy Yourglivch at 11:24