UEA Symphony Orchestra and all that Jazz! 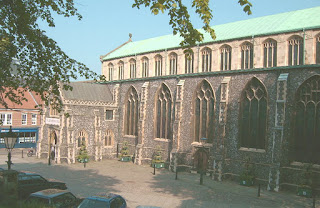 David Potter was an artist who loved to paint pictures of the Orchestra who passed away earlier this year. The programme was chosen from music that he enjoyed. The Save UEA Music campaign were handing out leaflets and asking the audience to sign their petition.

The concert opened with the fun of Martinu's La Revue de Cuisine complete with chef and saucepan headwear. The Kitchen Revue is strongly influenced by Jazz and is based on a tale of love and jealousy among a group of kitchen utensils.

George Gershwin's Piano Concerto in F was a triumph for the Orchestra and Alison Lincoln on piano as we were given a taste of the Twenties full of Broadway influences. The sound of New York that will remain timeless forever.

After the interval Vic Hobson led the UEA Duke Ellington Orchestra in a wonderful set of early works from Duke Ellington. We were treated to Black and Tan Fantasy, Rockin' in Rhythm and Mood Indigo that are all transcriptions of Ellington recordings made for the Lincoln Center by David Berger.

The evening ended on a high with Dvorak's Symphony No.9, Op 95 New World. The music reflects his experiences of America and was first performed in 1893. A mix of sounds that always thrills from the Czech composer.  The night was a great example of the UEA School of Music providing music for the community in Norwich.
Posted by Andy Yourglivch at 11:19