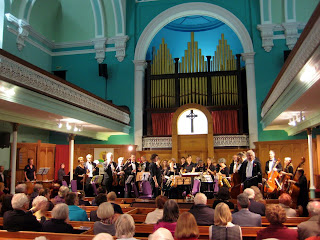 The Orchestra were founded by Martin Wyatt as an Orchestra for the local community. The programme for the afternoon was The Warsaw Concerto - Addinsell, The Whistle of Sandy McGraw - Robert Service, They Didn't Believe Me - Jerome Kern, Last Night I Had The Strangest Dream - Ed McCurdy, Requiem - Faure and Symphony No.7 - Beethoven. The concert featured Alison Mills - Leader, Martin Wyatt - Conductor, Kevin O'Regan - Piano and The Oriole Singers.

The programme was appropriate for Remembrance Sunday opening with The Warsaw Concerto that was written for the 1941 film Dangerous Moonlight. Reg Andrews a member of the Oriole Singers read the poem The Whistle of Sandy McGraw by Robert Service from the 1916 Rhymes of a Red-Cross Man. Martin Wyatt then sang Jerome Kern's They Didn't Believe Me a song from the 1914 musical The Girl from Utah before Win Forster read the poem Last Night I Had The Strangest Dream by Ed McCurdy.

Before the interval The Oriole Singers joined the St. Gregory's Orchestra in performing Gabriel Faure's Requiem. This was a moving performance  of this ethereal  work that Faure saw death as a happy deliverance rather than as a painful experience.

Refreshments were served during the interval before the St. Gregory's Orchestra conducted by founder Martin Wyatt performed Beethoven's Symphony No. 7, a piece of music that has the ability to lift the spirits of everyone that was first performed in 1813 at a charity concert for soldiers wounded in the Battle of Hanau. At the end of the concert the Lord Mayor of Norwich Councillor Jenny Lay gave an address praising Martin Wyatt and his work with the orchestra.
Posted by Andy Yourglivch at 15:02