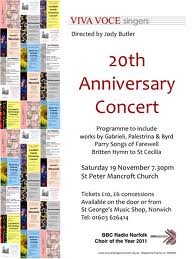 On Saturday 19th November 2011 I attended the Viva Voce Singers 20th Anniversary Concert at St. Peter Mancroft Church, Norwich that provided an evening to celebrate the joy of choral singing. The BBC Radio Norfolk Choir of the Year 2011 were directed by Jody Butler as they celebrated this special anniversary.

This was a wonderful evening of choral singing from this small and friendly Norwich based chamber choir who help to raise money for local charities. With a splendid set of 16th century European sacred music pieces to open the concert we were then treated to Benjamin Britten's Hymn to St. Cecilia which is a setting of poetry by Britten's friend W.H. Auden.

Before the interval there was sacred music by William Byrd including Ave verum Corpus which is one of his best known pieces. Fully refreshed by a delicious apple juice during the interval I looked forward to Hubert Parry's Songs of Farewell. The choir were on top form as they performed this set of anthems which contain some of the most moving passages in Romantic a cappella music.
Posted by Andy Yourglivch at 12:34