Carousel at The Barbican 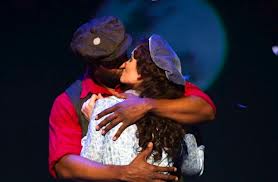 On Thursday 23rd August 2012 I was back in London to attend the Opera North performance of Rodgers and Hammerstein's Carousel at The Barbican Theatre. On the train in the morning I received a text saying that I could have my seat upgraded. After a lunch of vegetable burritos, spicy tomato salsa sauce, grated cheese, sour cream, guacamole and tortilla chips at The Barbican Food Hall I made my way to my seat in the stalls for the matinee performance.

Voted best musical of the 20th century by Time Magazine, Carousel features breathtaking dancing and wonderful music including the songs If I Loved You, June is bustin' out all over and You'll Never Walk Alone. Set on the New England coastline, Carousel is a story of true love, loss and feelings left unspoken. Following the ill-fated love affair between bad boy Billy Bigelow and trusting Julie Jordan, this classic musical is deeply touching and heartwarming.

This production featured an outstanding cast including Katherine Manley as Julie Jordan, Sarah Tynan as Carrie Pipperidge and Michael Todd Simpson as Billy Bigelow. Carousel was directed by Jo Davies, with designs by Anthony Ward and choreography by Kim Brandstrup and Kay Shepherd. James Holmes conducted a large orchestra which helped to take us on a magical journey.

This was a wonderful afternoon to be at The Barbican Theatre as Opera North put on a brilliant and glorious show of this classic Rodgers and Hammerstein musical. I really enjoyed everything about this production. The singing and the music played by the orchestra was of the highest quality. An emotional experience was had by all who were in attendance. Carousel was absolutely brilliant.
Posted by Andy Yourglivch at 14:06