I'm Singin' in the Rain at the Palace Theatre 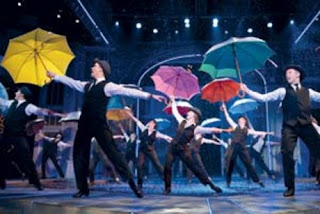 On Saturday 21st July 2012 I attended the matinee performance of Singin' in the Rain at the Palace Theatre, London. This Musical is based on the classic MGM film starring Gene Kelly, Donald O'Connor and Debbie Reynolds with screenplay by Betty Comden and Adolph Green.

It’s the roaring Twenties and silent movie stars are the biggest names in the world. Don Lockwood has it all, a string of hit films and a studio-engineered romance with the most beautiful actress in town. But with the new phenomenon of the talking picture on the way and a chance meeting with a talented young chorus girl set to steal his heart, things are about to change for Don and for Hollywood forever.

With all the charm, romance, comedy and tinsel town glamour of one of the world’s best-loved films, Jonathan Church’s brand new production features a glorious score including the classics Good Morning, Make ‘em Laugh, Moses Supposes and the legendary Singin’ in the Rain.

Starring Adam Cooper, Daniel Crossley and Scarlett Strallen this West End Production is truly magical especially in such an historic venue as the Palace Theatre. Those sitting in the front rows were advised to wear raincoats as the cast sang Singin' in the Rain. This is such a feel good show with lots of fun and laughs. I'm singin' in the rain, just singin' in the rain. What a glorious feelin' I'm happy again.
Posted by Andy Yourglivch at 10:52