Desdemona at The Barbican 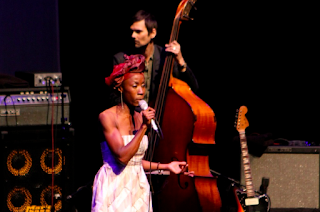 On the evening of Thursday 19th July 2012 I attended the performance of Desdemona by Toni Morrison, Peter Sellars and Rokia Traore featuring Tina Benko at Barbican Hall in the City of London. This event was part of the World Shakespeare and London 2012 Festivals.

Written by Toni Morrison and directed by Peter Sellars, this project was inspired by the fourth act of Othello, in which Desdemona, facing death, sings Willow Song, taught to her by Barbary. This allows an exploration of Desdemona's fascination with Africa, for monologues on women, love, race, relationships and war, for discussions in the afterlife with Othello himself, and between the mothers of Othello and Desdemona. All the voices were provided by Tina Benko.

Between the spoken narratives Malian singer Rokia Traore sang a set of powerful songs with the lyrics translated on a background screen. She is one of a new generation of African women who's music has moved beyond the World Music category. This was an amazing night to be at The Barbican with this moving and visual performance. We danced together, our bodies moving in such harmony it was as though we had known each other all our lives.
Posted by Andy Yourglivch at 15:21