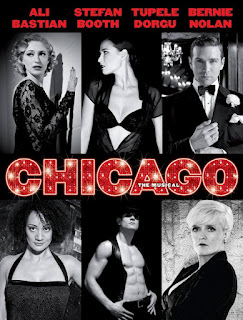 On the morning of Saturday 18th August 2012 I caught the early Norwich to Nottingham train. After a morning spent at Nottingham Castle I made my way to the Nottingham Royal Concert Hall to attend the matinee performance of Chicago. Murder, greed, corruption, exploitation, adultery and treachery...all those things we hold near and dear to our hearts.

This musical is based on real life events back in the 1920s when nightclub singer Roxie Hart shoots her lover and along with Cell Block rival, double murderess Velma Kelly they fight to keep from death row with the help of smooth talking lawyer Billy Flynn. With an amazing soundtrack which includes All That Jazz, When You're Good to Mama and Razzle Dazzle this was a sensational afternoon's entertainment.

Ali Bastian starred as Roxie Hart while Tupele Dorgu thrilled as Velma Kelly. Billy Flynn was played by Stefan Booth on an afternoon that raised the temperature at the Nottingham Royal Concert Hall. Adrian Kirk's Ragtime Band were permanently on stage during the performance bringing us all the musical numbers. With this Musical coming to the end of it's run in London's West End this was the perfect opportunity for me to catch the magic of this Bob Fosse show.
Posted by Andy Yourglivch at 11:18