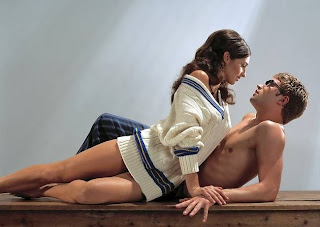 On Saturday 11th August 2012 I attended the matinee performance of Matthew Bourne's Play Without Words at Norwich Theatre Royal. This sultry dance drama is set in Chelsea in 1965, it shows how the lives of a man of the house and his wife are turned upside down by the arrival of a new manservant.

Terry Davies's Jazz score created just the right atmosphere as were were taken back to the swinging sixties and was played brilliantly by a quintet led by Michael Haslam. This is an adaption of Joseph Losey's 1963 film The Servant.

Anthony, Glenda, and Prentice, the man servant are each played by three people, often simultaneously. Sheila by two people. This made for an very interesting and visual show. This was London in the sixties and the spectacular dancing was a treat to watch. I had yet another amazing experience at Norwich Theatre Royal as Matthew Bourne and his dance company put on a very inspiring performance.
Posted by Andy Yourglivch at 03:19