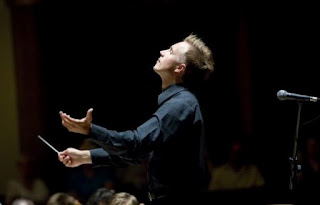 On the evening of Thursday 23rd August 2012 I returned to the Royal Albert Hall for the BBC Proms to see the Royal Liverpool Philharmonic Symphony Orchestra conducted by Vasily Petrenko in Prom 54. There had to be a Shostakovich Symphony and with violist Tasmin Little playing Delius's Violin Concerto this was always going to be a brilliant BBC Prom.

The programme consisted of Symphony No.9 - Sir Peter Maxwell Davies, Violin Concerto -Delius and Symphony No.10 in E minor - Shostakovich. Thelma Hardy was Leader of the Orchestra at this wonderful concert.

Sir Peter Maxwell Davies's Ninth Symphony is dedicated to HM The Queen on the occasion of her Diamond Jubilee. The piece is one continuous movement divided into two parts. Full of fanfare flourishes to mark this special year, this was a great opening from the Royal Liverpool Philharmonic Orchestra.

This year is the 150th anniversity of the birth of Delius and with Tasmin Little being one of his most ardent champions it seemed appropriate that she should play his Violin Concerto's first appearance at the BBC Proms for over 40 years. Tasmin Little played brilliantly to light up the Royal Albert Hall.

Shostakovich's Symphony No.10 was his first symphony to emerge after Stalin's death and with it's mix of furry and sorrow this piece shows his complex relationship with his homeland. This is one of Shostakovich's most highly rated symphonies and Vasily Petrenko with the Royal Liverpool Philharmonic Orchestra made sure we experienced it at it's best with a wonderful performance.
Posted by Andy Yourglivch at 15:29