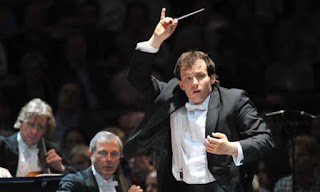 On the evening of Tuesday 21st August 2012 I attended Prom 51 of the BBC Proms at the Royal Albert Hall which featured the City of Birmingham Symphony Orchestra conducted by Andis Nelsons with Laurence Jackson as Leader of the Orchestra. It was brilliant to be back in London at the BBC Proms for another concert of wonderful music.

The programme consisted of Rusian and Lyudmila Overture - Glinka, Calculus of the Nervous System - Emily Howard and Symphony No.7 in C major Leningrad - Shostakovich. This was a varied programme with delights for everyone as young Latvian conductor Andis Nelsons and the CBSO gave us a night to remember.

Glinka's rousing overture to his Pushkin-derived opera raised the curtain, paying tribute to a composer revered as the founding father of Russian nationalism. This was the UK Premiere of Emily Howard's Calculus of the Nervous System, a piece that is inspired by the work of Ada Lovelace, daughter of the poet Byron and a prophet of the computer age.

Dmitry Shostakovich composed the Leningrad Symphony mostly in the city itself as it came under siege from Germany in 1941. This piece's wider aim was a protest against brutal regimes worldwide. This was the highlight of the evening for me as Andis Nelsons lead the Orchestra in a rousing and emotional performance of this epic symphony. This was an amazing 75 minutes at the Royal Albert Hall as we were treated to this extraordinary Shostakovich Symphony which at times sounds like a film score.
Posted by Andy Yourglivch at 12:00