Dreamboats and Petticoats at Ipswich Regent 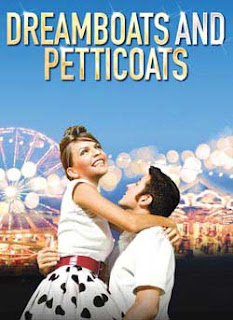 On Saturday 10th November 2012 I caught the train to Ipswich to attend the matinee performance of Dreamboats and Petticoats at Ipswich Regent Theatre. This is a jukebox musical built around songs from the late 1950's and early 1960's. A brilliant feelgood show. Bobby and Laura were played by Scott Haining and Elizabeth Carter.

It's 1961, where Bobby, an awkward but talented teenager, is auditioning for a band at the local Youth Club. He almost gets the part, but is edged out by a last minute arrival to the auditions: the cool and confident Norman. The teenagers that hang out at Youth Club all know each other, even if they're not necessarily friends. These teens include Bobby and his best friend Ray, Ray's younger sister Laura who has a crush on Bobby, cool girl Sue whom Bobby has a crush on, and Donna, who is Sue's friend.

Bobby's father announces that the Youth Club association is holding the first National song writing competition. Bobby and Laura, who have similar tastes in music, agree to write a song together. At first they make some progress, with Bobby coming up with an idea and basic tune, which Laura takes on to expand into a full song. But Bobby then starts ignoring Laura when Sue, the girl he has a crush on, starts flirting with him. Laura warns Bobby that Sue is only pretending to be into him in order to make Norman jealous, but Bobby doesn't care.

The Youth Club are taken on a road trip to a local carnival, and there emotions run high. Ray and Donna get together and become a couple. Sue's plan to make Norman jealous works, and Norman takes her away to be alone. Bobby is crushed, and Laura tells him "I told you so". However, when the whole group gathers together at the end of night, Norman boasts to the others that he went "all the way" with Sue. Sue is enraged and humiliated, insisting that they only kissed. Bobby confronts Norman, insisting that he apologies to Sue. At first Norman refuses, so Bobby challenges Norman to an "official" fight in a ring, in which Bobby wins. Norman apologises to Sue, and Sue is ecstatically grateful to Bobby and happily becomes his girl.

Laura tries to remind Bobby about their songwriting commitment but to no avail, since all his time is dedicated to Sue. Norman is also being ignored by Sue, even after apologising and promising to become better. Norman then approaches Laura, both flirting with her with suggestions that what he really needs is a "good" girl, and that they should write a song together. Bobby is confused and upset when he hears about this from Ray, who also tells Bobby that Laura has had feelings for him for a long time. Bobby and Sue break up when Bobby accidentally causes Sue to fall out his bedroom window, but when he approaches Laura to reconcile, she claims that he only started to notice her because she's started dressing nicer and doing her hair.

Laura's 16th birthday party is held at the Youth Club. She and Sue decide to put the awkwardness between them to the past, and agree to be friends. Norman and Sue reconcile. Bobby and Laura confess their feelings in the locker room, admitting that they've each liked the other for a long time and didn't know what to do about it, and finally kiss.

News comes in from the songwriting competition. Bobby and Laura, who are a team again, have made it to the next round. Norman did not make the cut at all. It then jumps to the final National performance, where Bobby and Laura win with the results of the joint efforts, the pop song "Dreamboats and Petticoats".

It was a wonderful afternoon at Ipswich Regent Theatre as we were all treated to a load of great songs like Let's Dance, Dream Baby Dream, It's Only Make Believe, Great Pretender, Let's Twist Again and C'mon Everybody. At the end of the performance everyone was singing and dancing along to the songs as the Regent became one big celebration of the Sixties.
Posted by Andy Yourglivch at 09:24