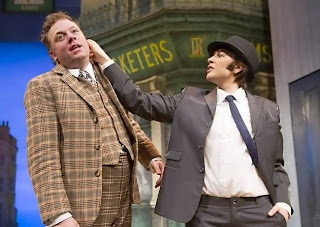 On Saturday 8th December 2012 I attended the matinee performance at Norwich Theatre Royal of the National Theatre on Tour's One Man, Two Guvnors by Richard Bean which is based on The Servant of Two Masters by Carlo Golgoni. This comedy with songs by Grant Olding was a complete sell out at Norwich Theatre Royal as the audience had an afternoon of laugh out louds.

Fired from his skiffle band, Francis Henshall becomes minder to Roscoe Crabbe but Roscoe is really Rachel, posing as her own dead brother who's been killed by her boyfriend Stanley Stubbers. Francis spots the chance of an extra meal ticket and takes a second job with one Stanley Stubbers. To prevent discovery Francis must keep his two guvnors apart. It's that simple or that's what it seems.

One Man, Two Guvnors is a glorious celebration of British comedy with a unique mix of satire, songs, slapstick and glittering one-liners. Rufus Hound was brilliant and funny in his role as Francis Henshall as he tried to carry out the instructions from both his Guvnors on the south coast in Brighton. The Craze played songs between scenes including The Brighton Line which added to a fine afternoon's entertainment at Norwich Theatre Royal.
Posted by Andy Yourglivch at 10:08