LSO and Kavakos at The Barbican 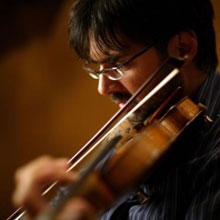 After an afternoon in London's West End on Sunday 25th November 2012 I made my way to The Barbican to attend the London Symphony Orchestra's UBS Soundscapes concert featuring violinist Leonidas Kavakos. Semyon Bychkov conducted the orchestra in a programme that consisted of Violin Concerto - Berg and Symphony No.1 Titan - Mahler.

Berg's Violin Concerto was written in 1935. It is probably his best-known and most frequently performed instrumental piece. The concerto is structured in two movements, each further divided into two sections. The Concerto was written as a memorial "to an angel" upon the premature death of Alma Mahler's daughter Manon Gropius.

Mahler began his First Symphony in his late twenties. Incorporating themes from his earlier song cycles, this monumental score charts a young hero’s coming of age. It retains a youthful energy, but explores suffering and sorrow, and ends by defying the mundane and insisting on life’s joy. This piece reached it's definitive four movement form in 1896.

This was a concert full of energy with the LSO and Leonidas Kavakos playing Berg's Violin Concerto with lots of enthusiasm and emotion. After the interval Semyon Bychkov led the LSO in an absolute brilliant performance of Mahler's Symphony No.1. There was a great atmosphere with lots of applause at the end on another memorable night at The Barbican.
Posted by Andy Yourglivch at 12:04