Jane Eyre Volume I at the UEA Drama Studio 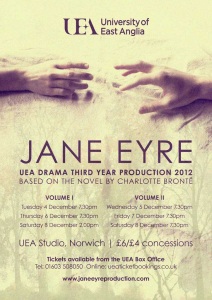 On Tuesday 4th December 2012 I attended the UEA's third year Drama students adaptation of Charlotte Bronte's Jane Eyre Volume I at the UEA Drama Studio in Norwich. This was the first part of a two part adaptation which reinvented the traditional period drama with a large ensemble cast bringing together original music, dance and a brand new script.

Volume I follows Jane Eyre, a young girl who comes from nothing but wants to seize all that life can offer. Surviving her bleak childhood through strength, determination and a keen spirit, Jane begins working as a Governess at the mysterious Thornfield Hall. Here she finds the love and comfort she has always longed for in the shape of her master, Mr Rochester. But Thornfield hides a dark secret and Jane is forced to choose between her beliefs and her chance of happiness.

I found the play very enjoyable and experimental. This is a dark adaptation of Charlotte Bronte's classic novel. We were taken to the world of Jane Eyre and were able to sense the harsh reality that she would have had to face. I am no bird; and no net ensnares me: I am a free human being with an independent will.
Posted by Andy Yourglivch at 13:17