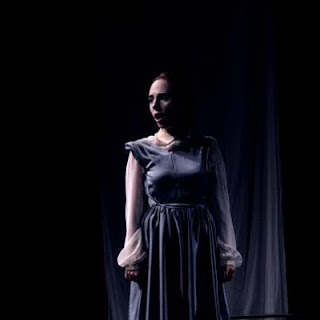 On Friday 7th December 2012 I was back at the UEA Drama Studio for Jane Eyre Volume II. After attending Volume I on Tuesday evening I was eagerly looking forward to the second part of the UEA third year drama students unique adaptation of Charlotte Bronte's classic novel.

Volume II is the story of a traumatised Jane found homeless and vagrant, wandering across the moors and trying to run away from her troubled past. Heartbroken and alone, she stumbles across the Rivers’ house where she attempts to forget the love she has lost and the pain she has suffered. But what is it that happened at Thornfield? Who is this character, St John, who appears to have such an interest in Jane? And will she ever find a way to be reunited with her true love?

This was another wonderful evening to be in attendance at the UEA Drama Studio as yet again the audience were taken to the harsh world that Jane Eyre would have had to face. Dark and funny with added original music, the play incorporated dreams, flashbacks and delusions which made for a very interesting performance. "I am not an angel," I asserted; "and I will not be one till I die: I will be myself."
Posted by Andy Yourglivch at 23:42