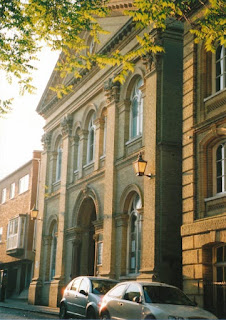 This was time for the St. Gregory's Orchestra to have some Christmas fun as they thrilled and entertained us with Arthur Sullivan's Iolanthe but some of the orchestra found Gilbert's words irresistible and felt obliged to burst into song. Eleanor Skeate was soloist for Mozart's Concerto in B flat for Bassoon which was his first concerto for a wind instrument.

Wensum Valley Brass were originally a small group formed by members of the brass section of the Norwich City Concert Band. The group have been part of the evening street entertainment for the Lord Mayor's weekend. This was the first time they had appeared in formal concert format.

This was a wonderful afternoon of music at the United Reformed Church, Princes Street, Norwich which helped to raise money for Nelson's Charity which is for children and young people who need help and support to deal with losing a loved one. Well done to both the St. Gregory's Orchestra and Wensum Valley Brass.
Posted by Andy Yourglivch at 11:15