The Phantom of the Opera at Her Majesty's Theatre 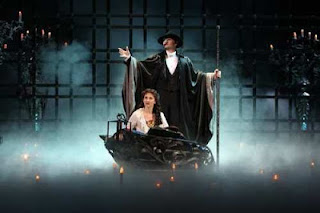 On Saturday 29th December 2012 I attended the matinee performance of The Phantom of the Opera at Her Majesty's Theatre in London's West End. This incredible musical from Richard Stilgoe and Andrew Lloyd Webber is based on the novel Le Fantome de l'Opera by Gaston Leroux.

At that time, the opera house is, claimed by many, to be inhabited by a ghost. If this ghost is in anyway offended or annoyed then he will cause mayhem in the opera house. The ghost or phantom then decides to help a lowly chorus girl, Christine Daae by giving her music lessons through the wall of her dressing room. He pretends to be the spirit of her dead father and as a result of this she becomes a talented singer who is then thrust into the limelight.

This phantom worships Christine and is determined to make her a star. He demands that the opera house management cast her in a starring role in the new opera Il Muto but the manager, Raoul refuses to do so. As a result of this the phantom, angered by this refusal decides to cause chaos in the opera house. He is chased but manages to evade capture by causing a fabulous chandelier to crash to the ground.

Later on, we see the Grand Masquerade Ball. Six months have passed since the Phantom’s last appearance and people have started to think that he has gone forever. In that time, Raoul and Christine have become engaged which causes the Phantom to return in a fit of jealous rage.

He makes new demands of the management and tries to win back the affection of Christine but she is committed to Raoul who she loves deeply. In a confrontation, the Phantom demands that Christine comes back to him or Raoul will die.

There were brilliant performances from Marcus Lovett as The Phantom, Sofia Escobar as Christine Daae and Simon Thomas as Raoul as a packed Her Majesty's Theatre enjoyed a Christmas treat in London's West End. Andrew Lloyd Webber’s mesmerising score along with the fantastic scenery and breathtaking special effects, magically combined to bring this tragic love story to life.
Posted by Andy Yourglivch at 08:58