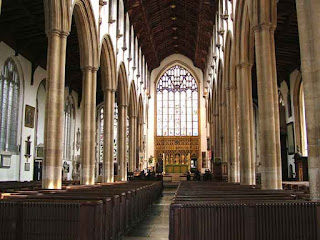 On the evening of Saturday 20th April 2013 I attended the Keswick Hall Choir with Norwich Baroque's Coronation Music concert directed by Christopher Duarte at St. Peter Mancroft Church, Norwich. This event was planned to celebrate the 60th anniversary of Queen Elizabeth II's coronation in 1953.

The programme consisted of Zadok the Priest - Handel, The King shall rejoice HWV - Handel, The Lord God is a sun and a shield - Blow, Praise the Lord, O Jerusalem - Boyce, My heart is inditing Z.30 - Purcell, The King shall rejoice - Boyce, Praise the Lord, O Jerusalem Z.46 - Purcell, The Lord is a sun and a shield - Croft, Let thy hand be strengthened HWV 259 - Handel and My heart is inditing HWV 261 - Handel.

Handel's anthem Zadok the Priest has been a feature of every coronation since that of George II in 1727 and is a great way to start any concert. Zadok the Priest and Nathan the Prophet anointed Solomon King. And all the people rejoiced and said: God save the King! Long live the King! May the King live forever. Alleluia. Amen. As well as George Frideric Handel there was music by John Blow, William Boyce, Henry Purcell and William Croft on a night of royal celebrations at St. Peter Mancroft Church.

This was the first time that the Keswick Hall Choir and Norwich Baroque had performed together. The Coronation Music concert proved to be a great success as a large audience were treated to a wonderful programme of music that filled both this historic church and our hearts. Kings shall be thy nursing fathers and Queens thy nursing mothers.
Posted by Andy Yourglivch at 12:38