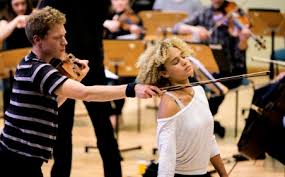 On the evening of Saturday 18th May 2013 I was back at St. Andrew's Hall, Norwich to see the Aurora Orchestra at the Norfolk and Norwich Festival performing their Battle programme which combined break dancing and orchestral music. The Aurora Orchestra were conducted by Rory MacDonald with Thomas Gould - Leader and Max Baillie - Viola. The Dancers were from Bboy's Attic and Company Decalage.

Battle featured a playlist linked loosely by the theme of conflict or struggle. There is the baroque fireworks of Biber's Battalia, Shostakovich's third string quartet whose original guise as a straightforward 'war narrative' in fact masked more complex beginnings and Chris Willis' radical re-imagining of Holst's Mars, the Bringer of War. At the heart of the programme was Maxamorphosis, a major new work composed by Julian Philips and choreographed by Marso for chamber orchestra, dancers and solo viola.

This was an amazing night at St. Andrew's Hall with the Aurora Orchestra giving us a brilliant unique programme of break dancing and orchestral music which was greatly enjoyed by the enthusiastic audience. Maxamorposis not only featured breakdancers and a contemporary dancer, but the soloist, Baillie, danced as well as played the viola. He is trained in Capoeira, the Brazilian martial arts danceform. The Norfolk and Norwich reached another level of excitement with the stage being filled with break dancers as well as the orchestra.
Posted by Andy Yourglivch at 11:46