McAllister and Jackson at Norwich Cathedral 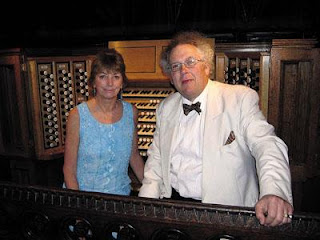 On Monday 6th May 2013 I attended the Bank Holiday organ recital at Norwich Cathedral featuring Maureen McAllister and Robin Jackson, husband and wife organ duettists. They performed a varied recital to entertain us with music from Wilhelm Rudnick to Ralf Bolting.

Maureen McAllister studied at the Royal Academy of Music, Westminster Cathedral and in Siena. Her recital career has included BBC Radio 3 and most cathedrals and town halls in the country. Robin Jackson was a prize-winner at the Royal College of Music and at seventeen he was organist at Christ Church, Lancaster Gate, London. From 1980 to 2005 he was in charge of student music making at the University of Bath.

The duettists put on a splendid performance at Norwich Cathedral to warm us on a Bank Holiday Monday. It was very interesting to witness this recital with two organists, which I enjoyed especially as the recital included a varied programme of music. At the end of the recital we all gave Maureen McAllister and Robin Jackson a big round of applause which was richly deserved.
Posted by Andy Yourglivch at 11:15